On June 25,2016, I spent an impromptu morning in the North End that incredibly morphed into the following unexpected experience.  The unforgettable episode of this blog is Mr Anthony Coppola’s (Biffo) first person account/oral history video about the devastating fire at 168 Endicott Street (see bottom of page). My most sincere gratitude goes to my new friends that I met just that morning – Janine and Anne Louise Coppola – without their assistance NONE of this would have occurred!  I honestly felt as if I was there for a much larger purpose than simply my curiosity that the events that unfolded were supposed to be documented.

I was standing on this street corner at N. Margin and Endicott St. (where the car is turning) talking to my Aunt Camille on the phone trying to figure which building on Endicott Street might be the one that the fire happened in.  Anne-Louise and Janine Coppola popped their heads out of the window and asked me if I was lost.  I said no, I was looking for information on a fire that happened in April 1943 on this block.  I told them I was the daughter of the baby, Ann Sabbio, thrown out of the window in the fire and caught by a taxi driver.  They said they would be right down. 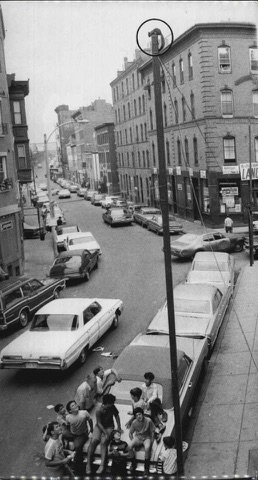 Next, they took me to the North End Association/ Sons of Italy club around the corner and I met a bunch of old school guys.  Apparently my Uncle Geno, aka Red, was there at 6 am that very morning.  One guy called him and I spoke to Geno.  They all concurred I should talk to a ninety year old guy named Biffo.

Earlier that morning, I was trying to research the Endicott street number on a flight from Baltimore to no avail.  However, here are a few snippets from articles I found from 30+ newspapers around the country!

When we were back in front of 168 Endicott street I said a prayer on the sidewalk because of the hallowed ground I felt I was on, I knew that Sebastiana and Johnny had likely died right about there.  Thank goodness my grandfather and all the other three children were out of the house. A moment later, a current tenant to at 168 Endicott was coming home and Janine asked if we could come in.  We did, we walked into the building and out to the back courtyard.  I took pictures there it was covered with moss.  When I was in the basement, I said another prayer and for a time I couldn’t move as I felt something very odd there.  I turned to Janine and said, there is something odd about this basement. 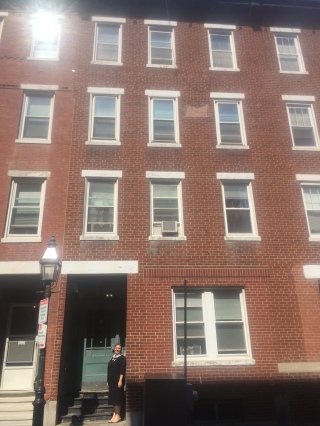 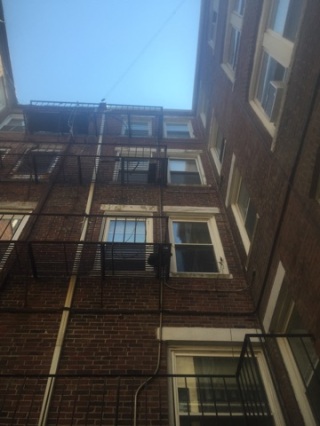 I don’t want to confuse the story, but in the course of my time on the block a supersweet grandmother named Amelia, also popped her head out a window.  This 90 year old ‘strong as an ox lady’ had us come up for cookies, breadsticks, homemade delicious cheese, etc. She was incredible, even made her own pasta which she is showing me in these pictures.  She did not know about the fire as she came ten years later from Italy, but her biscottis, raisin cookies and tarralis tasted identical! Importantly, her apartment was the very same layout as the Sabbio-Infantino abode. It really gave me a sense for what it must have been like when they lived there before the fire as I don’t think the decor changed much and it was perfumed by a lovely bunch of escarole cooking on the stove.

Then the finale occurred,  I needed to get to my conference near Copley, but the sisters Coppola said that they would drive me there, that I HAD to talk to Biffo.  The following two videos are 20+ minutes long, but really give so much incredible detail.  This guy is the real deal and he has an incredible memory.  In one part, he says he is talking about my Dad, but it is now clear to me he must be talking about Uncle Ettore. If you are able thank Biffo and the Coppola sisters on behalf of our family that would be great! I did a bit, but I am sure it would mean a lot from the rest of the family as well.

Below is also a picture of where the family moved after the fire, amazingly only one block away at 76 N. Margin Street – the building next to the Pizzaria Regina.

All in all it was an incredible morning, I made it to my conference at 1 pm with one minute to spare [Anne Louise handed me a Parziales pizza she bought for me while I was talking to Biffo and a yummy loaf of Italian bread!: )] I thought I was just going to take a quick walk around the North End, but ended up with a treasured family memorial.